A proposed plan to upgrade tBTC v1 to v2 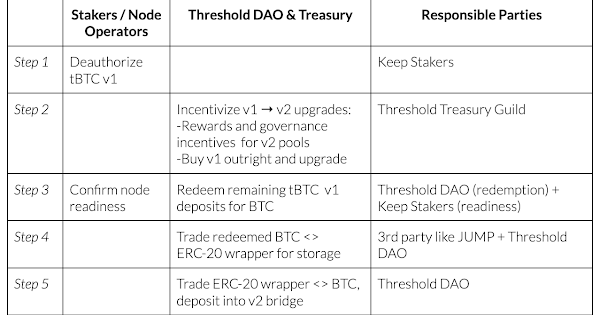 Introduction and the need for DAO support

tBTC v1 has run without problems for over 2 years now. Keep (now Threshold Network) built v1 to favor security over scale. Now we’re changing that. We’ve taken what we’ve learned and are building a new bridge to scale DeFi to all of Bitcoin.

Soon tBTC v2 will be the most dominant bridged Bitcoin, available on every major chain. In order to get from here to there, we first have to coordinate a responsible sunsetting of tBTC v1. Since it’s fully decentralized, the only way this can be achieved is through a combination of incentives and economic assurances.

The plan, at a high level, happens in 5 steps, all of which require DAO vote approval. First, all bonded tBTC v1 stakers must deauthorize tBTC v1 in staking contracts. This change will prevent more tBTC v1 from being minted. Next, the Threshold DAO will decide how to allocate funds to properly incentivize all tBTC v2 pools. These rewards will go into effect in the coming months if approved by the DAO.

Then, after a certain amount of tBTC v1 has been upgraded to v2, the DAO will start using the upgraded tokens to slowly unbond all outstanding keeps. This releases the BTC backing each tBTC v1 along with each signer’s bonded ETH.

The Keep team has been working with all known stakers for this moment. The BTC that is released during the unwind will then be swapped for an ERC20 token representation (like WBTC) and custodied by the Threshold DAO. The Coverage Pool will secure these tokens until they can be converted into tBTC v2 in late Q2.

After the dust settles, tBTC v1 TVL should be near zero. The Threshold DAO would then have enough WBTC in its treasury to fully back the tBTC v2 token supply. Thousands of ETH will be released back to the stakers and bonders that participated in v1. When the new scalable v2 bridge launches, the DAO will convert the custodied WBTC back into BTC, and then deposit those assets back into the v2 bridge – fully completing the upgrade process while also safely sunsetting the old bridge.

This plan isn’t final until the Threshold DAO community approves the several steps mentioned above, as well as ironing out some details like timing and incentivization. The two most important considerations are using the Coverage Pool as an insurance fund against BTC loss, and how to store the BTC once unminted. Once approved, the execution will occur over the next several months leading up to the launch of the new tBTC v2 bridge.

Thanks for thinking this through (and I imagine with input from others) and proposing, @dougvk. We certainly need a solution soon, and if this were the only way forward I’d support it. But the issue I have is with relying on a centralized bridge like WBTC. As noted in my support for @Agoristen’s alternative proposal, I think that Threshold’s reputation/brand would suffer, as the centralized bridges would be likely to pummel us for relying on one of them to get stakers over to v2.

Beau presented a very detailed explanation of TBTC in this weeks Threshold Community call (6/24/22). While I consider myself knowledgable about TBTC, this presentation was incredibly in-depth and beneficial. I don’t have a link to share but wanted to mention it as a very valuable point of information.

The session was recorded, so we can post a link here and in Discord (per Will’s message here).

Just making note that I asked whether we had a process in place yet to monitor each wallet for enough cushion should the largest staker(s) pull out, and Beau suggested it would be good to have a spreadsheet modeling that.